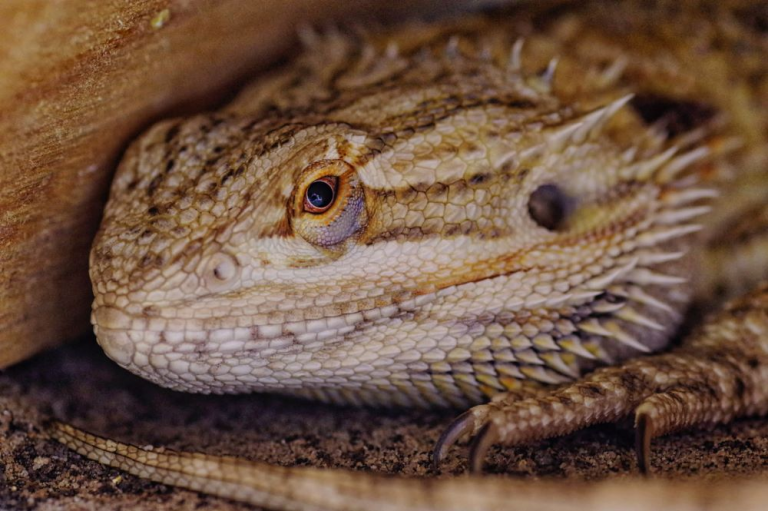 My bearded dragons always sleep on me whenever I’m around.  They’re like dogs. They enjoy cuddling.

My bearded dragon likes to sleep on me. She’s more like a human companion to me.

She usually sleeps right on my face but she has recently started sleeping upside down wrapped around my neck, it’s quite cute!

And it’s pretty normal and safe for them.  They like to sleep in dark places when they aren’t basking (which is their normal sleeping place).

Sleeping on Owners is the Nature of Cuddly Bearded dragons

Cuddly bearded dragons show their affection by sleeping on their human companions. They do not like to be disturbed, however.

“If you attend to one of your beardies it will display its displeasure by puffing itself up and opening its mouth wide,” she said.

A pet bearded dragon can’t speak English, but they’ll do their best to tell you if they don’t want to be bothered or picked up. Besides puffing themselves up and opening their mouths, these cold-blooded reptiles also change color. They become dark and scaly.

A bearded dragon likes humans. they are not picky about their companionship, either. They’ll often choose a favorite owner even if the person only handles the lizard once or twice a week.

Can a Bearded Dragon Have Emotion

Beardies are very intelligent lizards. They learn quickly whether good or bad. If they get used to being handled a certain way, they will act accordingly. But not all bearded dragons.

It happens especially in the case of young bearded dragons For example when I get my beard out of his cage he is usually very excited to eat some mealies or crickets. I use tongs to hold the cricket (I don’t like to touch bugs with my hands).

Every bearded dragon I have seen loves mealworms! So if you hand feed your beard mealworms, they will learn to follow your hand when you put it near their face.

Another sign of intelligence is bearded dragons dancing with each other (better than break dancing). This is especially common among female beards and I have seen many videos of this on youtube.

Bearded dragons also have temperature requirements. During the day they need to bask in a basking light so they can process calcium (which they get from plants).

They use their heat lamp at night so that they can digest the food and absorb nutrients (including calcium) during the nighttime hours. You can pretty much expect a bearded dragon to spend most of his time under his basking light if you keep it on for 12-14 hours a day.

They also need UVB light, and it is important to make sure they get enough calcium. Together the basking light and the UVB light make a bearded dragon a “triple threat”. I think we can all agree that triple threats look cool!

Vitamins such as calcium (and even some multivitamins) should be supplemented in their diet. It is recommended that you dust food items with calcium powder or liquid calcium before feeding them to your beardie.

Our dragons here at TBR eat crickets, mealworms, and greens daily and we supplement their food with vitamins and minerals. We also give our male dragon a bath once a week in shallow warm water where he gets to soak for about 15 minutes so that he can drink fresh water.

You can keep your beardie healthy by being observant of your bearded dragon’s behavior and feeding habits.

Bearded dragons are very affectionate lizards once you get to know them. They can have many moods, so it is important to read your beardies signals.

If he puffs out his throat to make it look bigger, this means that he is being territorial so back off! If he opens his mouth wide open at you, then he is trying to scare you away or threaten you so give him space! If he wants your attention, he will probably push his head against yours gently (but don’t be surprised if sometimes they try too hard).

Beardies are not confrontational animals unless provoked, but I would stay on the safe side until you understand how your beardie will react.

Can Bearded Dragons Show Affection in Other Ways

Bearded dragons show affection by doing a lot of cute things. They also show affection using their body language, such as head bobbing and waving, according to reptile veterinarian Dr. Mike Mader. So if they are doing that, it’s a good sign.

If your bearded dragons are showing you he loves you through his behavior, this likely means that he thinks you are part of his family and that he can trust you around his children (baby lizards) and other pets in the house. It’s well known that bearded dragons don’t like change and they like having a routine, so it might be important to keep your pet’s daily routine exactly the same every day for optimal health.

This means your buddy is trying to tell you something and coming closer to you, and it’s often a sign of affection and respect. When it head bobs at you, he may want something like food or he might be feeling threatened by another animal in the room. Beardies love their owners and can be affectionate in their own ways.

You should take note of how the head bob looks; if it looks aggressive there may be a problem (such as with mating) but if it looks like an affectionate action then you’re all good!

Similar to human arm-waving, this is when your bearded dragon waves his arms around while standing up straight. This means that he wants attention from you or doesn’t feel well.

If your buddy lunges or pounces at another animal, that means that he feels threatened and/or wants to get rid of the other animal (he does this when mating as well).

Don’t worry if you see the occasional tail wag; it doesn’t necessarily mean your pet is mad! This can actually be a sign of happiness and excitement, especially if you know your bearded dragon well.

How Much Do a Bearded Dragons Sleep in a Day

Bearded dragons require a great deal of sleep to recharge energy. The answer is rather variable, as it depends greatly on age and temperature. We will discuss those variables below.

A baby bearded dragon likes to have up to twice as much rest time as an adult. This means that a baby bearded dragon might need four to six hours of sleep every night, whereas an adult may only need two or three hours per night. In particular, juveniles often sleep after the sun goes down and before it comes up, while adults are most active during this period.

What Does Head Bobbing Mean to a “Cuddly Bearded Dragon” Owner

A lot of bearded dragon owners have asked us what does a head bob mean? – we know that it can be confusing and if you’re seeing repeated head bobs then there could be many reasons, so we decided to cover this topic in depth.

When do Bearded Dragon like Head Bob? There are multiple reasons why your pet is showing signs like this to both you and your family members.

Standing tall and looking around the room while at the same time bobbing his head up and down, then it’s a good indication that he wants something from you. It could be food or attention – if you think he might have been waiting for a while, go ahead and give him what he wants!

Some bearded dragons use head bobs as a way to show off their alertness and sense of curiosity. This is especially common in baby bearded dragons who are just learning how to explore their surroundings. Let your pet investigate whatever is around him; just make sure there are no dangerous objects around that can harm him or other pets in the house.

Bearded dragons are prey animals by nature so they instinctually know that being bigger than an object means being safer. If your one detects a threat, he might feel threatened and show you this by making himself look bigger.

This can be done by raising the beard, standing tall, and showing you that his head is bobbing up and down. Don’t punish them for this behavior – just give him space until the threat passes.

Although it might seem a little silly to us humans, sometimes a head bob is simply an affectionate gesture! If your pet likes to work out in the morning but jumps on your bed while you’re still sleeping or watches you brush your teeth before yawning at you mid-morning, then it could be a sign of love.

How to Create a Strong Bond with your bearded dragons

If you are searching for simple steps to create a strong bond with a bearded dragon then this article is for you. Bearded dragons are one of the most popular species that are wild yet can be pets. These creatures have friendly nature and are easy to keep in homes for petting. Once you establish the right kind of relationship, it will be much easier for you to deal with them at any time. Today we will explore some useful tips that can help you in developing a close relationship with your pet.

Bearded dragons are omnivorous animals, so you need to provide both vegetation and insects in their diet. Crickets, Silkworms, and Dubia roaches must form part of their diet.

Vegetables like collards, mustard greens, turnip, parsley, and dandelion must be included in their food to provide the required nutrients. Make sure that your pet lizard always has access to fresh water and also spray mist once or twice a day on the floor of the terrarium to keep it humid.

You need to set up a proper mood at home while making a bond with bearded dragons, just like cats. If you want your pets s like you then make sure that they see your happy face and friendly behaviors every time. Talk politely with them and feed them tasty insects.

When they feel comfortable around their owner then they will start recognizing him/her easily. Avoid frightening the beardie as this may create distance between you and it.

Above all, pay enough time for your little guy if you really want to develop a strong bond with him. As they grow really fast so you have to provide them with various kinds of toys and things they can play with.