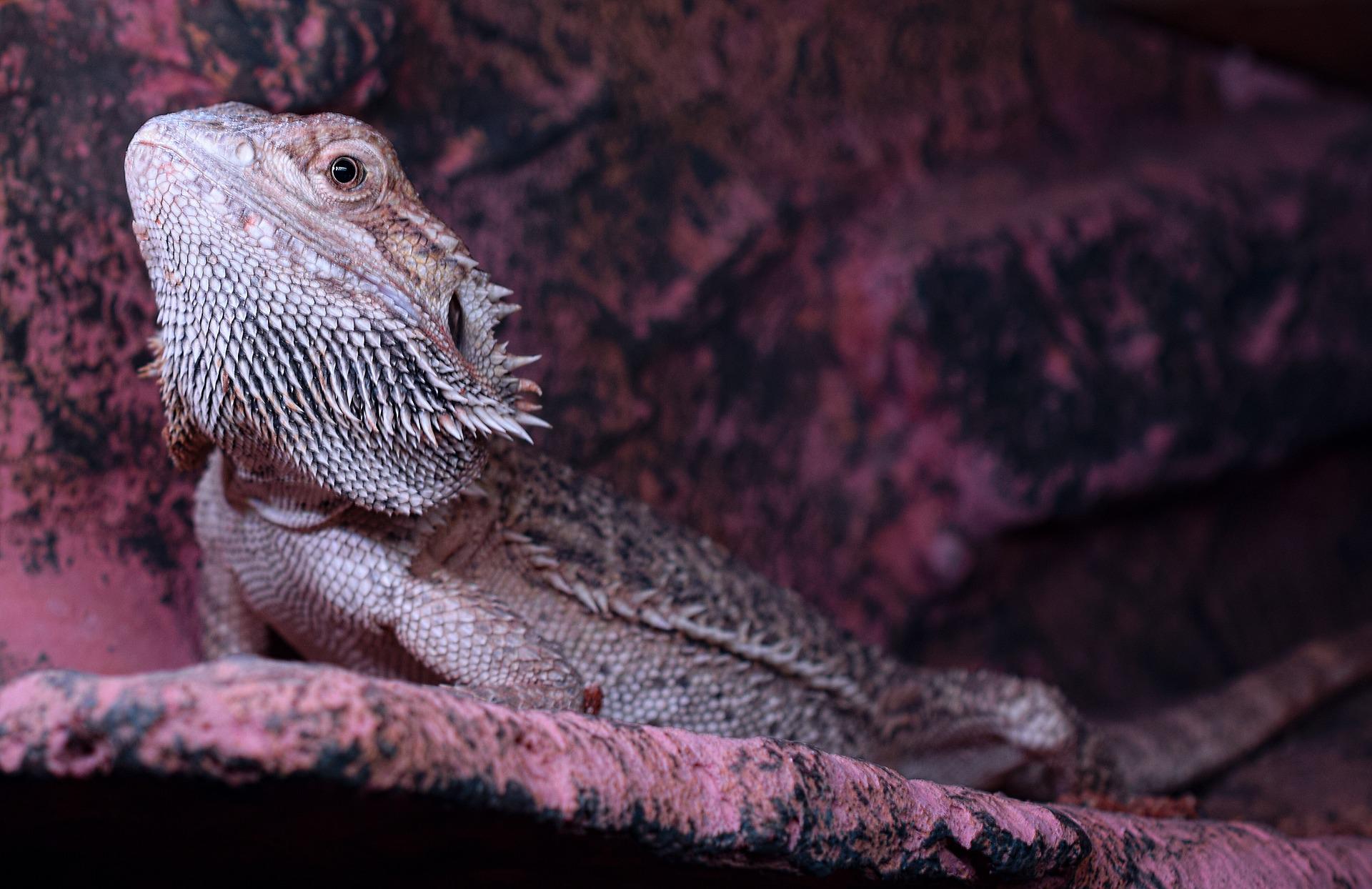 People who don’t have much experience with Bearded Dragons are often wondering about these popular lizards. There are a lot of unanswered questions and bearded dragon facts that will definitely grab your attention and make you wish, to learn more about them.

In this article, we will provide you with some of the most interesting information and facts about bearded dragons and some of them will probably amaze you.

1. There are eight different species of bearded dragons

The most common species is the Pogona Vitticeps (Central bearded dragon) and there is a great chance that you are keeping a beardie from this particular species at your home. They are going very well with people and because of that reason, they are the best for keeping them as pets.

Whenever you meet the name Pogona you should know it is a genus which indicates that the animal is a bearded dragon and the word that comes after the genus usually indicates the species. All these bearded dragons are native to a different part of Australia and we have a list of all 8 species that are living there:

2. By breeding you can create more varieties

In between a bearded dragon species, there are specific traits that can be bred, just like dogs for example. These variants that come out as a result of breeding are called morphs in the breeding community.

Every morph is coming out with its own, different, and unique characteristics and some of them are getting unique appearances and colors that make them exotic but also costly.

You should know there are 11 different and commonly accepted morphs and each one of them have its unique identifying traits. People that are usually going to the reptile shows can see these morphs displayed with price and ready for selling.

Let us take a closer look at these different morphs:

They want to spend a fair amount of time in the bushes, and also because they love to climb trees bearded dragons are considered semi-arboreal.

This is already a known fact for the beardie owners and they know if they put them something to climb on in their tank beardies will spend a lot of time up high in their enclosure.

4. Bearded Dragons are illegal in Hawaii

It is a very uncommon and interesting fact that Bearded Dragons can be found in any US state besides one – Hawaii.

Every US citizen can own a bearded dragon as a pet in 49 out of 50 states in America. If you live in Hawaii you just cannot!

While Pogona Vitticeps is native to Australia, all bearded dragons in captivity anywhere in the world are actually from other countries. This is because Australia has some of the strictest animal export laws in the world.

In the 1960s Australia outlawed the export of bearded dragons, which has made it difficult to procure beardies in countries outside of Australia. This is one of the main reasons why we see so many morphs.

Virtually all bearded dragons in captivity in North America and Europe were bred for pets, not for their natural habitat. A wild beardie would be much harder to care for and would likely be very aggressive towards humans.

6. They bob their head to communicate

Bearded dragons tend to develop behaviors like waving their hands or bobbing their heads. This is how these lizards communicate with other lizards of the same group and also many bearded dragons use it when it is mating season.

In the mating season, if you place a male bearded dragon in an enclosure with several female bearded dragons, he will begin to quickly bob his head up and down. This signal indicates that he is interested in mating.

If the female approves, she will respond with a slow bob at him. If she doesn’t approve, she will remain still. Occasionally, however, head bobbing may indicate that your beardie is excited or just trying to greet you.

This is one interesting and true fact, beardie dragons can change their sex. This is not happening in parts of their lives and they are surely not going to change their sex while you keep them.

There was a study that says that bearded dragon eggs that are incubated above 90°F or 32°C changed their gender from males to females before hatching. This is probably one of the weirdest facts about bearded dragons.

This is one of the favorite things to see bearded dragons do. They will often stand motionless and suddenly a limb will shoot up, and they will start waving at the other beardies in their enclosure.

Studies suggest that this behavior serves two purposes: one is to show submission when other males competing try to display dominance and the other is to greet other bearded dragons and establish social order.

If kept together in an enclosure where there is more than one dominant beardie, you will often see them sitting on top of each other—this is another show of dominance.

Bearded dragons lay 20-25 eggs per clutch. On average, 15-18 hatchlings can hatch per litter, however, many females lay more than one clutch.

When all the head bobbing and mating rituals pay off, this is the result: A beardie that becomes pregnant will find the right spot for her, dig a hole, and then will deposit her eggs there. After she does that she will keep and protect her eggs until they are ready to hatch.

For dubia roaches and crickets, the beardie dragons are predators with strong jaws but sometimes they lose some of their front teeth when they try to catch prey or tear apart some food. However, if we look at the big picture we can see that beardies are actually prey animals.

Bearded dragons must be on the lookout for predators in their natural habitat of Australia. They find a high ground, burrow, or hide when threatened by a predator or other dominant dragon.

Their most common predators are other lizards and birds of prey (eagles and hawks). Because of that reason, their eyes a located on the side which gives them a bigger and wider view, and on the other hand the predators’ eyes (people, lions, etc.) face forward to facilitate hunting.

Location of their eyes is probably the funniest odd beardie behavior as they tend to tilt their heads to look at something in a different direction from that which they are facing.

11. You can walk your bearded dragon

If you purchase a beardie’s harness and leash, it is easy to take your pet outside for walks. There is a nice selection of harnesses for sale on Etsy, but these items may also be purchased from local reptile stores.

The bearded dragon lives and wants to spend quality time in the sun (more UV rays), as sunlight provides natural vitamin D for the bearded dragon and helps stimulate metabolism. They also love being warm (because they are cold-blooded animals), getting light on their skin, and spending a little time away from their home environment.

If dressing your beardie up appeals to you, that’s fine. However, if someone asks me personally I draw the line at putting clothes on my bearded dragon. Most bearded dragons are calm creatures who don’t mind being dressed up from time to time.

12. They are very popular pets

Bearded dragons are among the most popular pet reptiles kept in homes worldwide. They are exotic pets that require low maintenance and have a docile nature, which may explain their popularity as pets.

Bearded dragons are the third most commonly kept household pets after dogs and cats in several European countries.

13. Beardies are able to run on two legs

Even though our scaly little friends usually run on all fours, they can run well on just their hind legs. In the wild, it’s their defense mechanism and that is how they usually avoid predators.

When they are on all four they can run up to about 9 mph (14.4 kph). They usually run slower than this on their hind legs, but speed isn’t the main thing they want to accomplish.

Standing up (sometimes they sleep standing) and running on two legs exposes more of their body to the air as they run and it reduces their body temperature. This keeps them cooler thus enabling them to run for longer distances when avoiding predators!

We are pretty sure that many pet owners have noticed the fascination of bearded dragons with human attention. This can be a cool thing to know as you interact with your beardie as they can recognize humans.

One interesting fact is that when your beardie is looking at you, she sees colors! Scientists are certain that this is so because bearded dragons have been known to stare at pictures of their homeland for long periods of time.

Scientists are certain that this is true because they have studied the way that light reflects off different surfaces. This explains why your dragon knows exactly where all of his or her favorite carrots (beardies love carrots) are hidden, even though he or she cannot see them!

15. They can smell through their mouth

Bearded dragons use their tongue to explore their environment and tend to test everything with their tongues, as their mouth houses their sense of taste and smell. This doesn’t mean they are not using their nostrils, because they can smell through their nostrils as well.

16. Beardies are able to swim

Although some bearded dragons enjoy bathing, it is never recommended to place them in water over their knees. Like many animals that would prefer not to drown, bearded dragons will swim when required, but they are not usually comfortable doing so.

They are not likely to make a leisurely backstroke or lap for fun and they are always making a mad dash and swimming motion for the edge so they can get out.

Another interesting thing about beardies is that they do not urinate even when they are over-hydrated. Bearded dragons come from desert climates they drink water sporadically and are very adept at conserving water internally and using it instead to stay hydrated.

None of it is wasted as urine, and uric acid is released in the form of white powder. If you see white powder left behind, it may mean that your bearded dragon did pee on you in its own way.

18. Sometimes they have soft spikes

Bearded dragons have an appearance similar to that of a four-legged mass of spiny scales. However, touch the spikes and you will find them soft and flexible. Whenever you try to pet them you will see that they going easy and are not putting a lot of pressure on your fingers.

However, if your beardie is feeling stressed or threatened its spikes will become prickly and stiff. Beardie dragons have this defensive natural mechanism together with scales puff and they react whenever they are put in a stressful situation or feel threatened.

Knowing this will help you a lot to understand if your beardie is stressed or relaxed. If they are stressed it will be better if you don’t touch them and leave them alone and play with them only when they are in good mood.

I suppose that you are not going to find a similar pet with so many different and unique characteristics as Bearded Dragons.

They are really weird dudes but very likable as pets because after dogs and cats (most common pets) most commonly kept household pets are bearded dragons in many different countries.

All we can say is that people who decide to get bearded dragons as their pets will have a lot of fun and unique moments with them.